As a coach, realize that PEOPLE are your greatest resource. A priority each offseason is to identify your leaders for the next season. Teams change drastically every year. Players graduate, transfer in, transfer out, quit, get injured… and more importantly, GROW UP at their own pace. Your strengths and weaknesses as a team will change from year-to-year. Always have a pulse on whose influence is being heard in the lockerroom and huddle.

• Your leaders will determine the success of your team. If nobody steps up in the lockerroom, the huddle or practice, your team will fall flat in game situations. Put time into leadership development for all players, especially your starts or 2-deep.

• Leaders create other leaders. There is a ripple effect, a domino effect, a reverse peer-pressure effect. Ask yourself, “Who is at the head of this thing?” Whose messages are being heard, which players have the most influence on their teammates? Are they using it positively?

• Your leaders won’t always be starters, seniors or scholarship players. Some of the greatest leaders I’ve worked with were walk-ons, back-ups and even freshmen! Oftentimes, you will have players with great attitudes and work ethics in this less-skilled group. Their leadership can contribute to the success of your team just as much as your star players. Recognize and acknowledge their efforts and attitudes!

• Not all seniors, starters or scholarship players are capable of leadership. Not everyone has “it” when it comes to leadership. 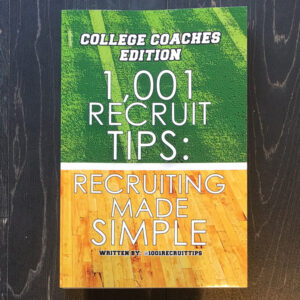 • Some players are faux-leaders. Starters or upperclassmen—who have a voice and whose messages are heard—who can be destructive to your team. Players who complain about everything. They’re never at fault. They don’t take responsibility. They always have an excuse. They’re always placing blame. They’re the biggest threat to your offseason. They can also be reformed… by the leaders of ACTION. Identify them and work with them individually to change their ways. Find out what else is going on in their life that can be causing the negativity.

• Ask your assistant coaches, your strength coaches, your managers, your academic staff, your trainers: “Who are our leaders?” Many players carry themselves differently throughout the facility and act different with other members of the staff. Some players act different when the head coach or their position coach isn’t around.

• Identify your leaders as a staff. Publicly praise them. Point out what they’re doing right, acknowledge their actions that will translate to success for your program. Point out what they do right in front of the rest of the team. Give them more responsibility. Expect even more greatness from them. Encourage them to create other leaders. These efforts can translate to the difference that you will need to win close games.

Never forget that PEOPLE are your greatest resource. Identify your best ones immediately and develop as many other potential leaders that you can! You need more than X’s and O’s to win big and win consistently!