BE SMART! You may be trying to impress your friends, but you may be turning off the coaches who have the power to offer you a scholarship. Is broadcasting certain thoughts and opinions REALLY that important if it could cost you a scholarship opportunity?

Think, the head coach at your dream school could be out there saying this… “I’m ready to offer you a scholarship and I can’t find your cell phone number so I go to hit you up on Twitter… then I read your tweets.” What will their next move be? Believe me, they’re reading them!!

#1- It’s not just what you say, but who you are connected to! When you comment on other people’s pictures or profiles, or like graphic or vulgar pictures, there is a good chance it’s showing up in coaches’ feeds!

As a prospective college athlete understand that not only are you being evaluated by your skills, size, speed and grades, your character is also under the microscope. In life you are warned to surround yourself with good people. Online, the people you follow, interact with and comment on will show up. Choose those people you follow and interact with wisely!

#2- In a society where players from Top 25 programs and many Division I teams make negative headlines on ESPN for their tweets and status updates (within hours or minutes after posts) – yes, many coaches eliminate prospects who show poor character, judgment and language in social media. These poor-taste posts won’t just have your name on it, they will have the university’s name attached to it too! Coaches know that how you carry yourself in high school will likely carry over to the college level and only become magnified. If you are Top 25 talent, you will be under a MAJOR magnifying glass even before you commit to a school!

#3- Understand that if you can’t handle the power of social media as a high school player, a coach will have serious doubt that you can handle it as a college player on a much bigger stage.

#4- Since coaches are trying to get to know you better, almost all of them search social media accounts for clues. Just like the film doesn’t lie, neither does the negativity you post on social media!

#5- Just because you didn’t write it, a RT still shows up in your timeline and is just as bad!

#7- Social media can be used for good, share links of your highlights with coaches via Facebook or Twitter! It may not help, but it just may be the way you can get your video in front of the right coaches, especially if you can’t find their direct email!

#8- Even if it’s a song lyric, not many college coaches are young enough to know that and read it as your opinion or thought!

#9- Stop with the subtweeting, it’s not a good look!

#10 – On the flip side, always tweeting about getting a workout in or extra cardio or position drills isn’t always convincing. If you spend so much time posting on social media about how hard you’re working out, a lot of coaches might be skeptical about exactly how much time you’re putting in to get better.

#11- Coaches are not able to communicate with prospects until a certain date, each sport varies. Social media rules are based on the dates that apply to ‘general correspondence,’ such as an email. When NCAA coaches are allowed to send ‘general correspondence,’ they are allowed to follow or friend a prospects’ social media account. After this date, they are also allowed to send private messages on Facebook or DMs on Twitter.

#12- You need to keep your social media PG, even if it is protected. A screenshot can get out quick and be used against you!

#13- If there is a change in coaching staff, it’s not necessary for you to tweet your emotional opinions. Take a breath, sit on it for a couple days and let everything play out before blasting out some comments you will regret in a week or two. Just because people ask you for your opinion, that doesn’t mean you have to give it. Use good judgement! 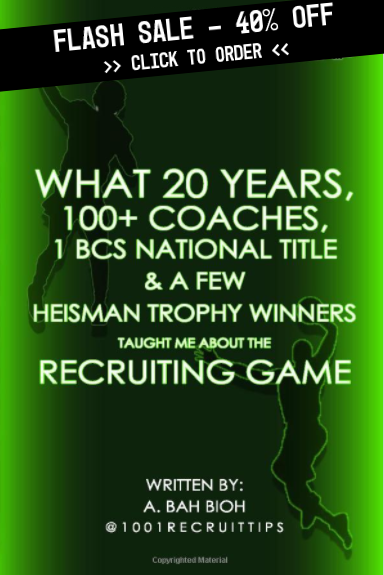